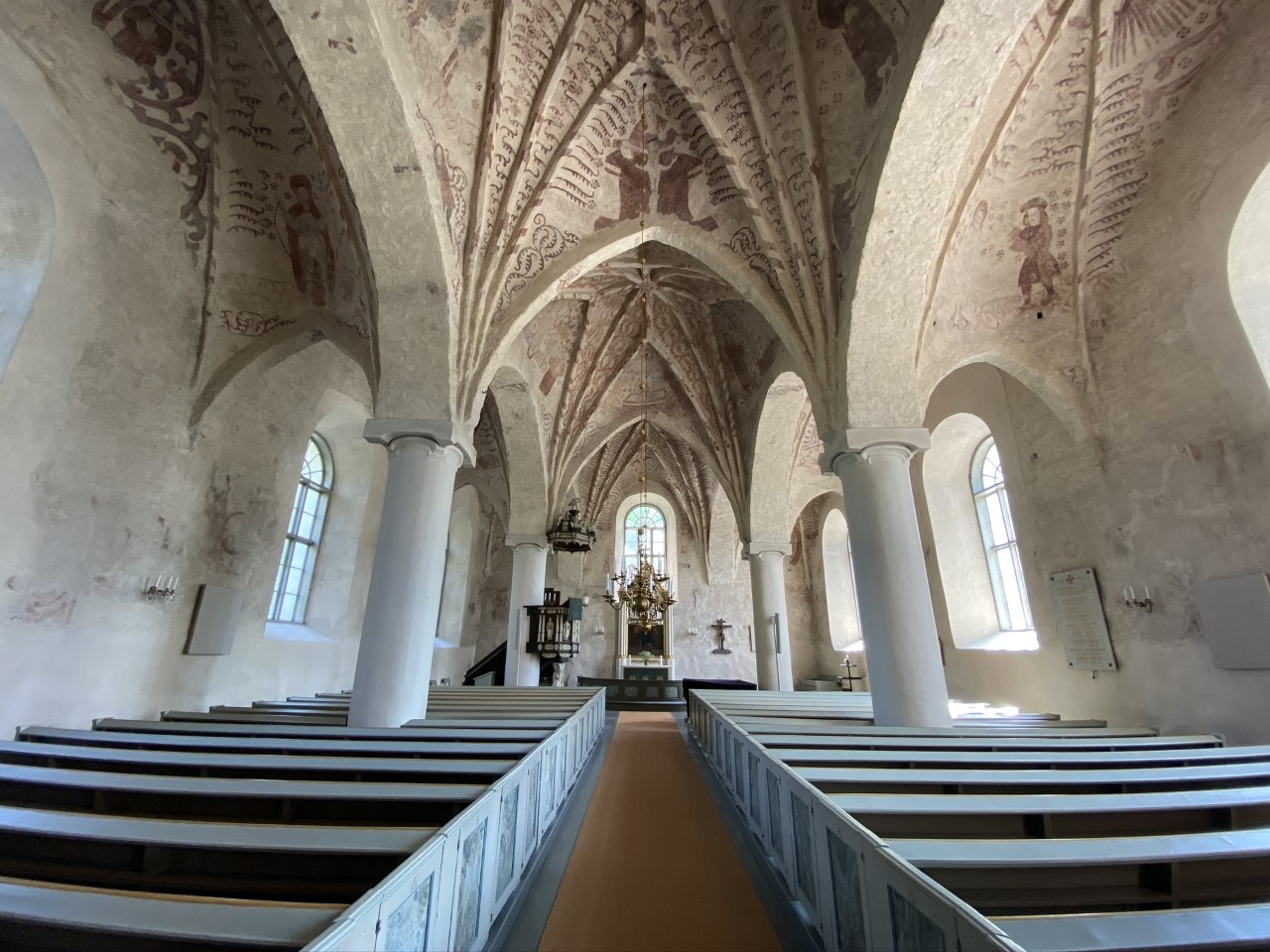 Already during the 14th century a small stone prayer chapel stood on a site north of the present church in Siuntio. When the large stone church was built, the old prayer chapel became the sacristy of this new church. After a devastating fire in St. Peter´s Church in 1823, the chapel was torn down, along with the weapons room on the south side of the church. (Some of the farmers usedto carry arms which they left in a special "weapons room" before entering the church). On the back wall of the old prayer chapel was a written text which said:

At the time when bishop Conrad Bidze Governed the Finnish Church, and permitted churches to be built all over Finland,  was I built and Peter´s name received. 1460.

Since the construction of the large stone church took at least 30 years, it must have begun during the beginning of the 15th century. During the course of its long history fire devastated St. Peter´s, originally a Roman Catholic church,  altogehter four times. Lightning struck the roof of the church in 1526 starting a fire; the church caught fire the second time in 1617, again in 1823 and finally in 1891, after which the wooden roof was replaced by one of sheet metal.

In 1686 a wooden church was erected east of the St. Peter´s stone church for the Finnish-speaking parishioners (the majority of the population in Siuntio spoke Swedish). When the main church obtained it´s first pipe organ in 1786, attendance at the wooden church dropped. It was eventually sold at auction and dismantled in 1881.

During the period of the Great Hostility (between Sweden and Russia) in 1713-1721 Russian soldiers destoryed the church completely. The church bells were stolen, as were most of the other portable objects, The rector and the chaplain fled to Sweden; only the assistant pastor remained in Siuntio.

The present pulpit is a copy of a pulpit that once stood in Turku cathedral but was destoryed in a fire of the cathedral. The owners of Svidja Manor, the noble family Reuterholm, in Siuntio, sir Johan Creutz, donated this pulpit in 1689 to St. Peter´s church as a memorial to his deceased son. The church had had several pulpits previously but the most famous and the most valuable one dates all the way back to the year 1625. It was donated by sir Åke Henriksson Tott and his mother HRH Sigrid of Sweden, the daughter of HM King Eric XIV of Sweden and Queen Karin Månsdotter of Sweden, who at the time owned Sjundby Manor. The sides of this pulpit are on display in St. Peter´s church. The three coats of arms carved on the pulpit are, from left to right, Queen Karin Månsdotter, Clas son Tott and HRH Sigrid of Sweden. 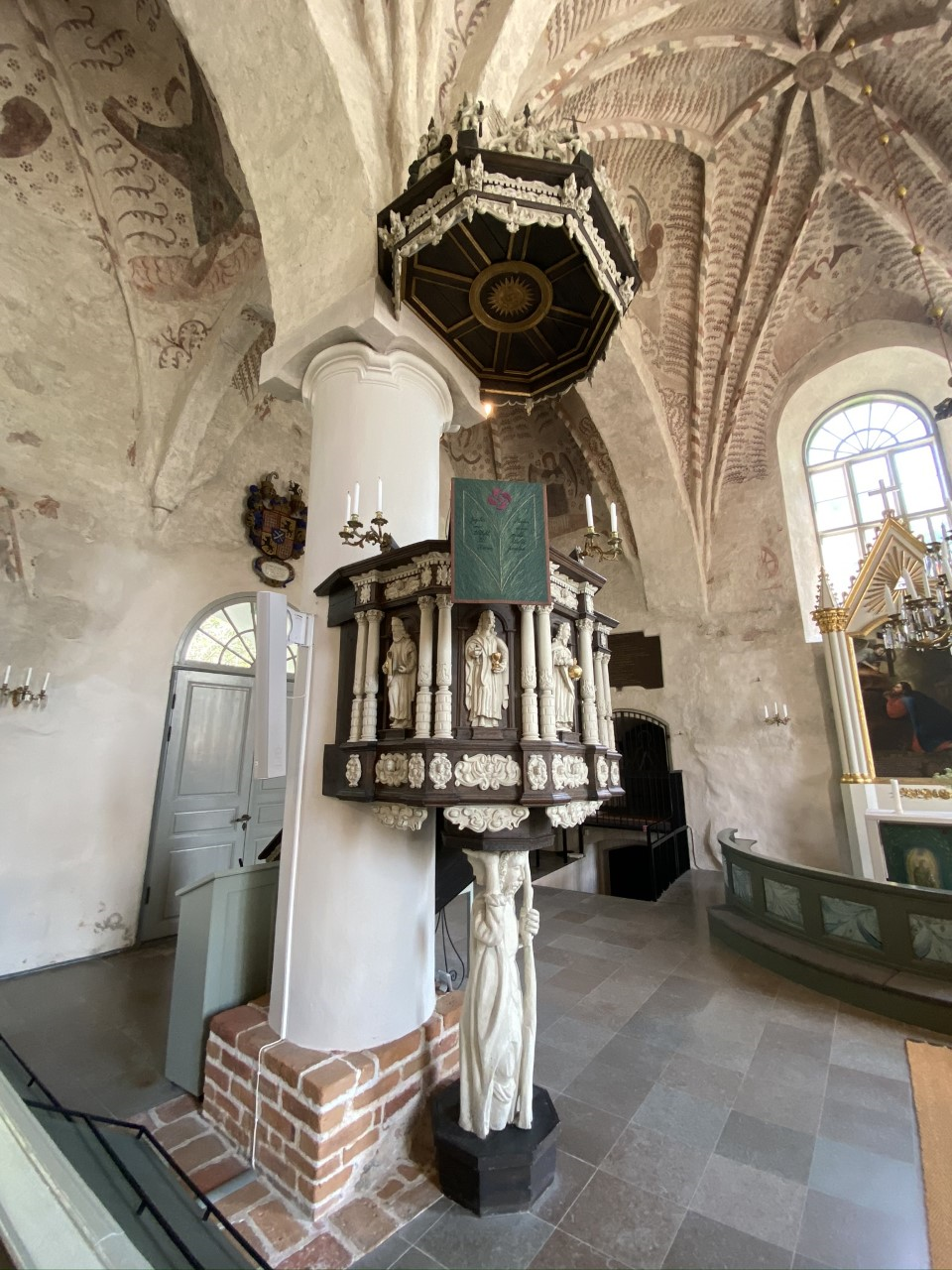 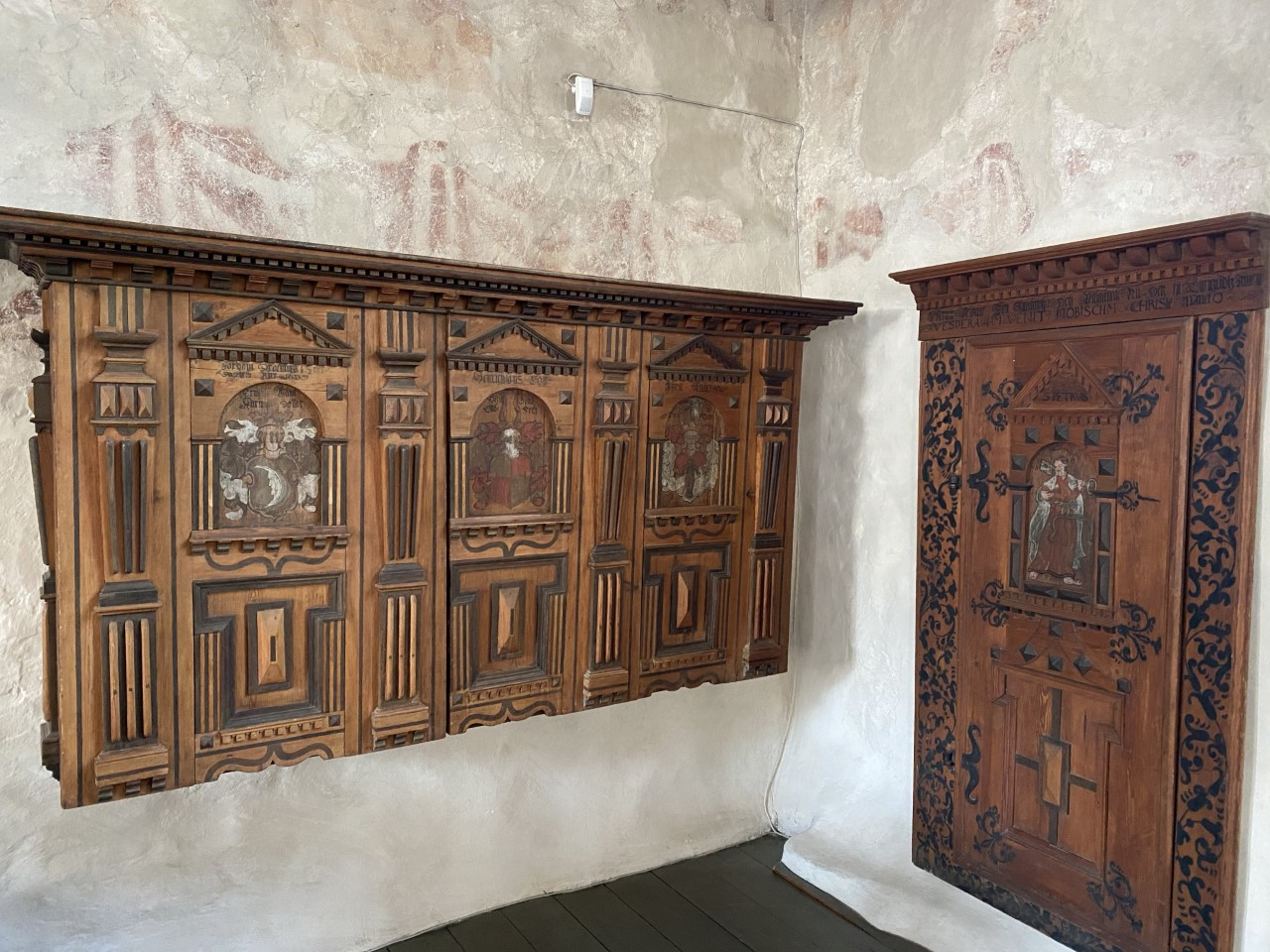 The altar painting was a gift from Baron Reuterholm in 1773 in return for permission to build a funeral chapel and vault for his family (the present sacristy and the cellar below it). The painting depicts Jesus praying in the garden of Gethsemane, The painter is unknown. Baron Reuterholm also donated the Communion silver at the same time. Above the altar painting is God´s all seeing eye in the triangle that symbolises the Holy Trinity.

When Finland came under the jurisdiction of the Russian empire in 1809, Baron Reuterholm decided to move his family to Sweden and in 1815 transferred the decorations from the funeral chapel as well as his ancestors' remains to the Cathedral in Strängnäs, Sweden. Only the memorial plaque above the chapel still remains. After the fire in St. Peter´s in 1823 the old 14th century prayer chapel, that was used as the sacristy, was torn down. This was the oldest part of the whole medieval church. After that the Reuterholm´s former funeral chapel was remodeled into the current sacristy. 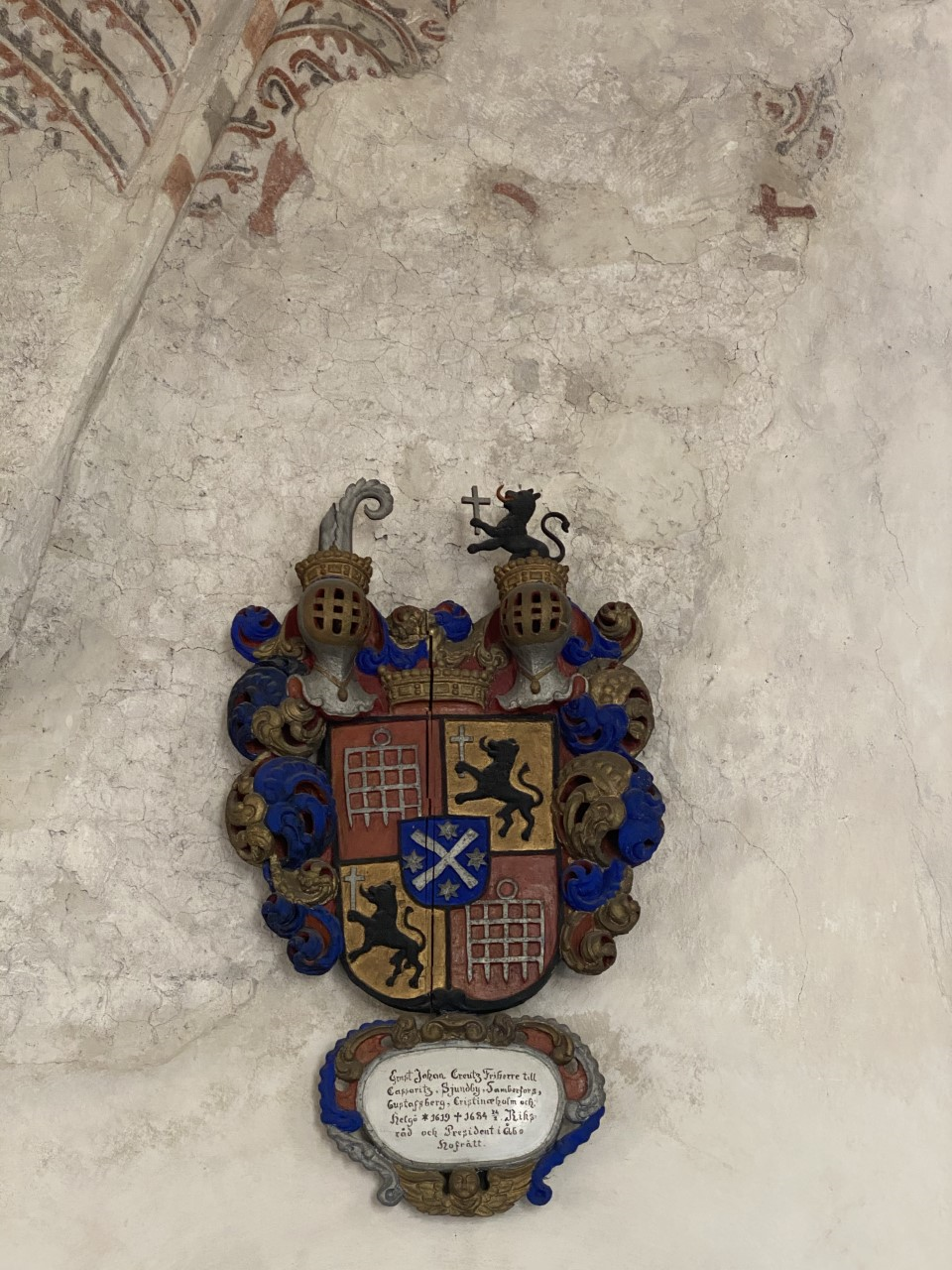 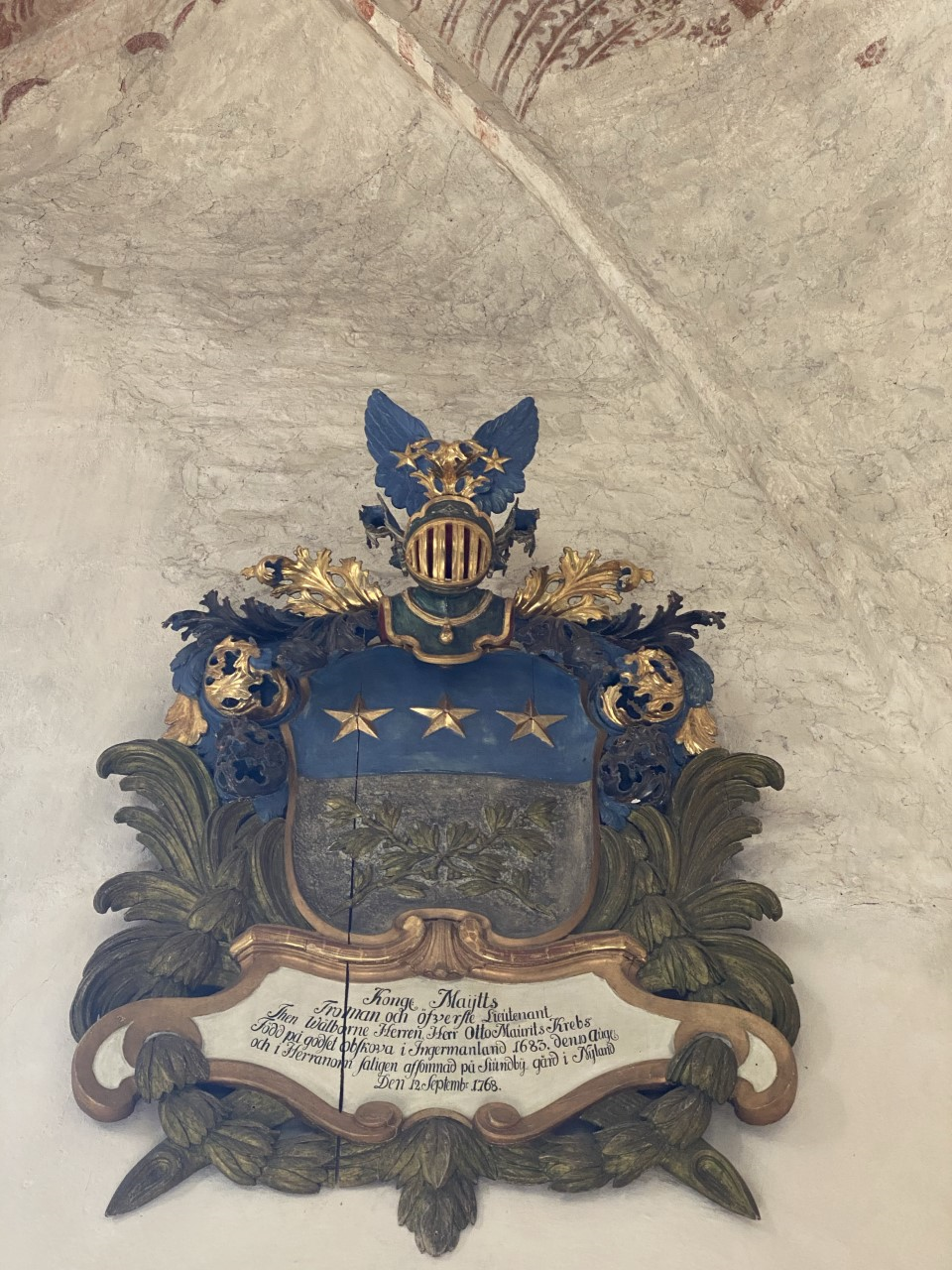 In 1550 Hebla Sigge, the widow of admiral and the Councilor of State of Sweden, Erik Fleming, donated the limestone baptismal font for St. Peter´s church. The font was crafted by stonemason Tomas Tomasson and in it is inscirbed: "Eric Fleming, Knight, and Hebla Siggesdotter, 1550". The names "Jacob and Clas Fleming, the former owners of Svidja manor in Siuntio, are engraved on the base of the font. This baptismal font is still in use. 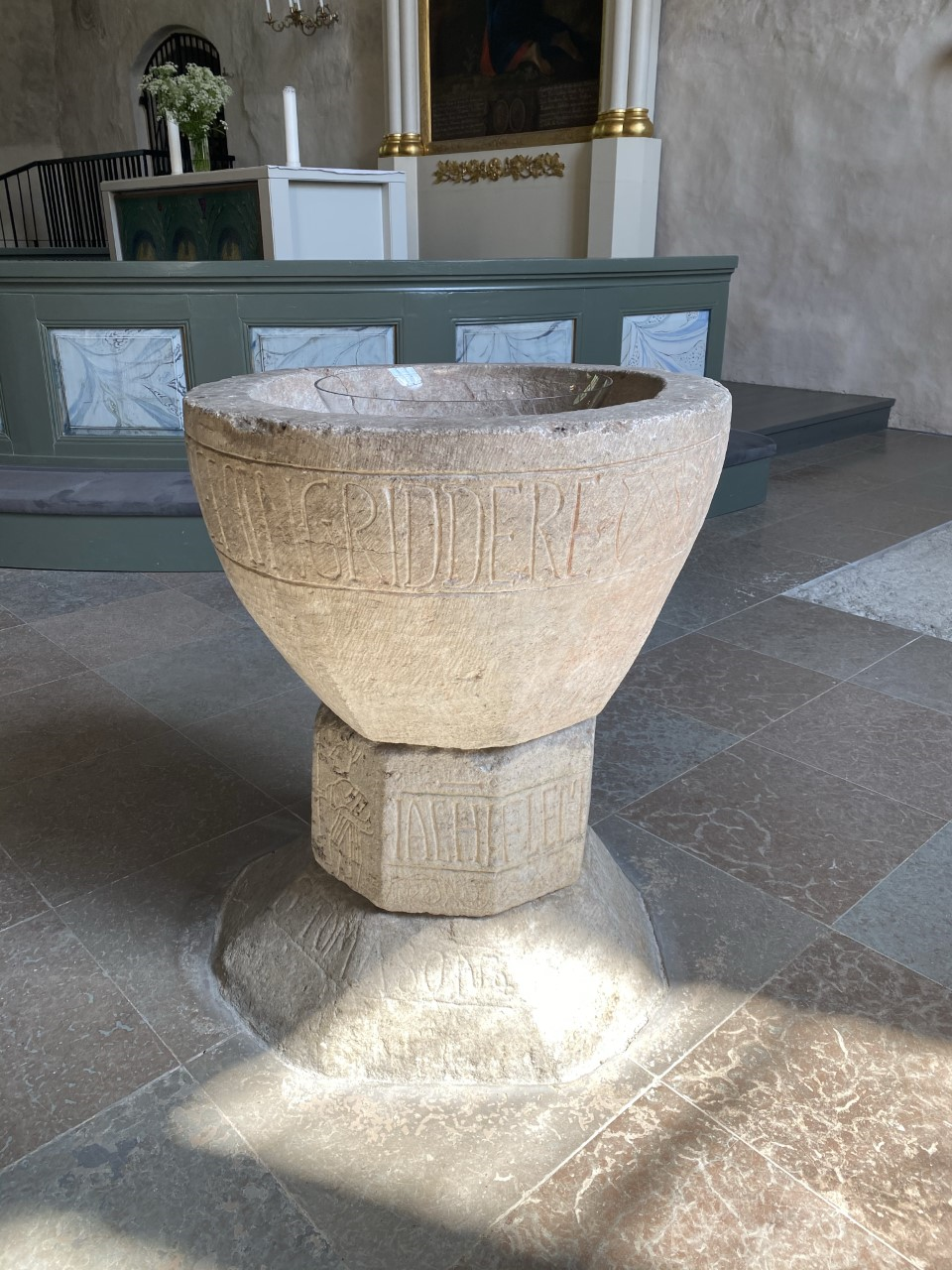 During the years 1510-1515 the walls and ceiling vaults of St Peter´s were decorated with scenes from the Bible. This was a common way for the illiterate part of the population to get an idea about what the priests are telling. During the Age of Enlightment the medieval paintings were painted over. in 1938 the paintings, or what was still left of them, were once again uncovered. Uncommon for the St. Peter´s church is that during the Reformation the paintings were not painted over like in many other Protestant churches. 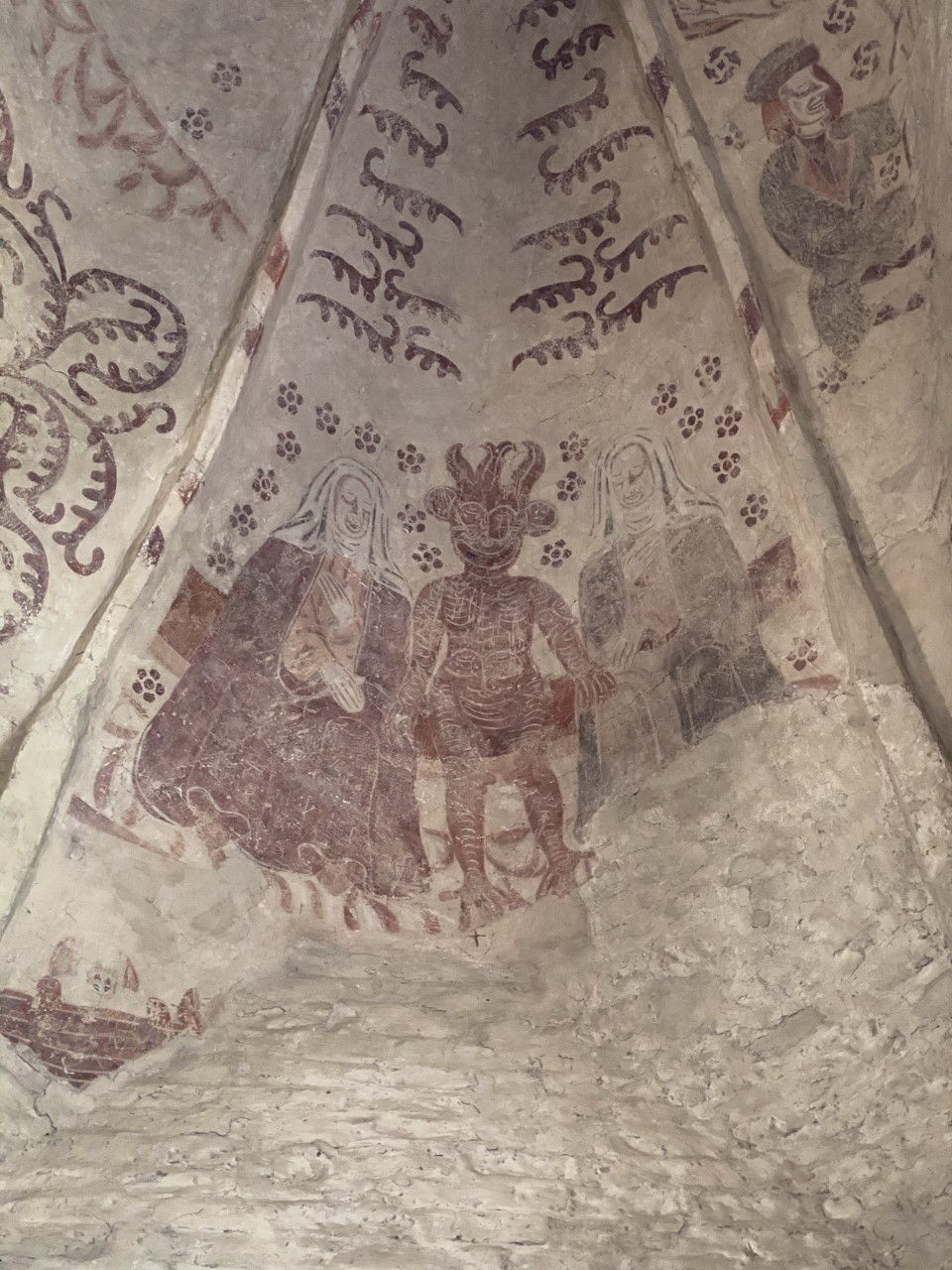 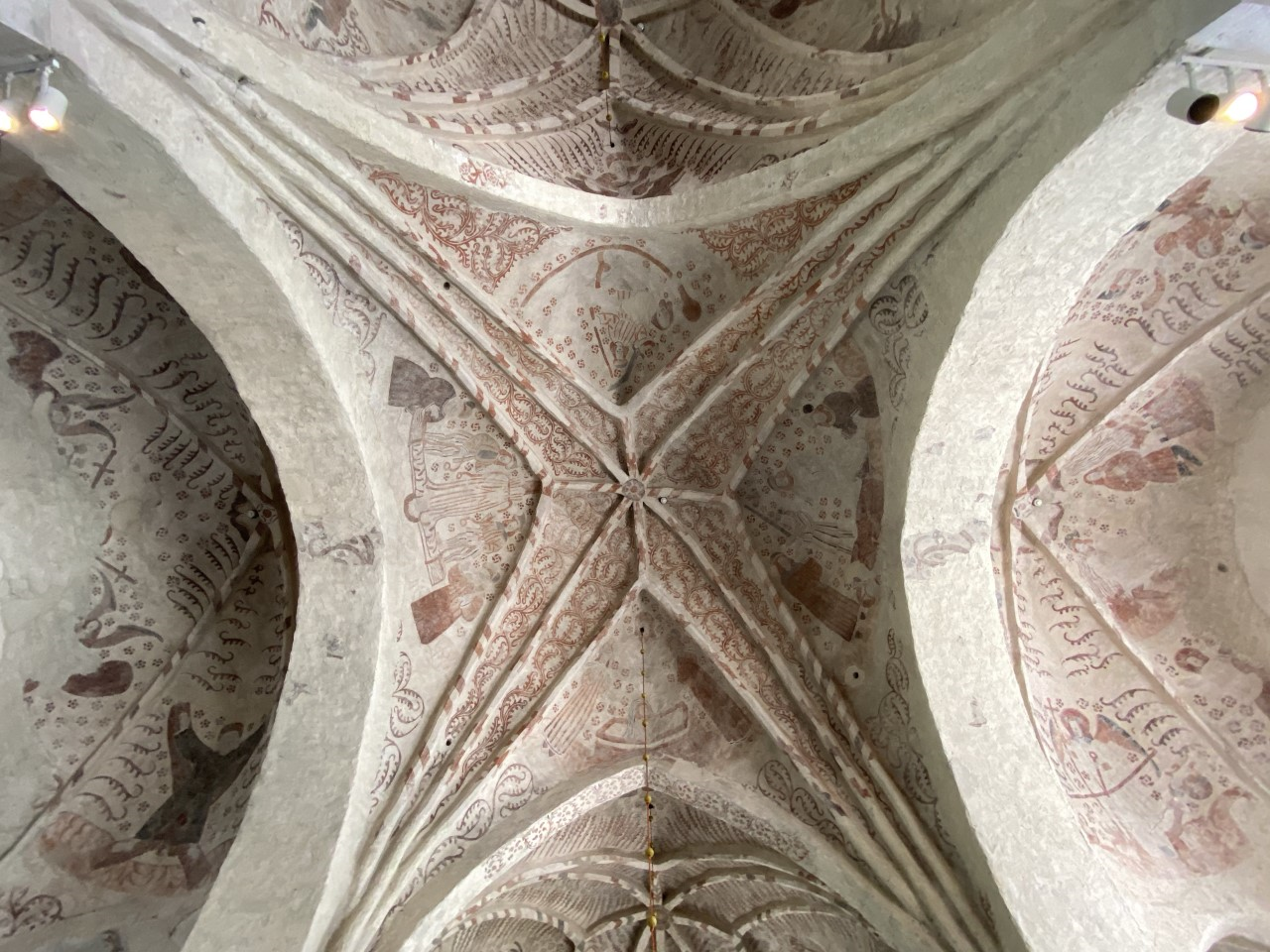 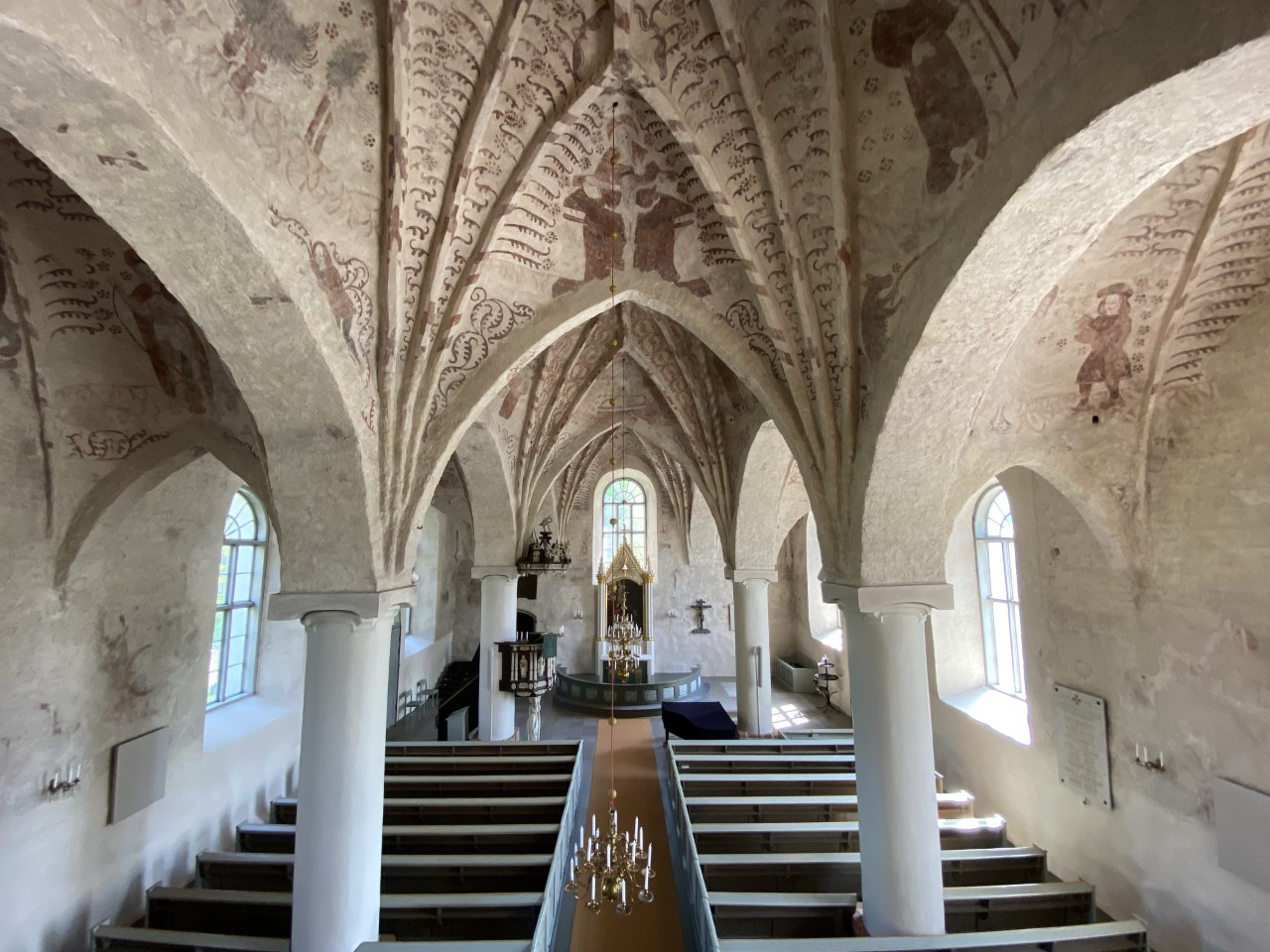 The devil bullying women (on the left), paintings on the vaulted ceiling (the middle), an overall view to the church (on the right) 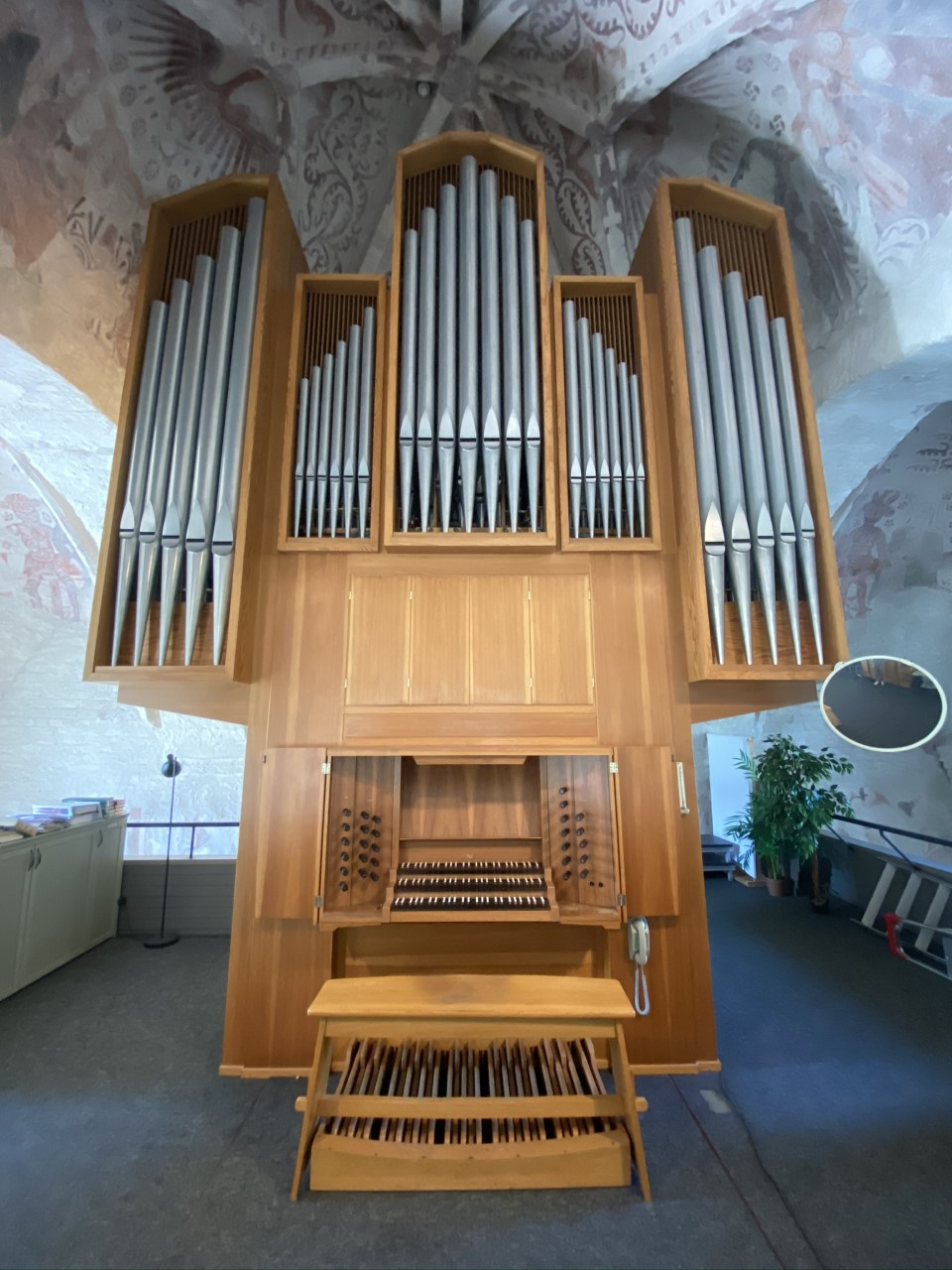 The stone foundation of the bell tower is the oldest preserved part of the church that has survived to this day. It dates back to the 14th century. The wooden upper section of the tower has been destroyed many times and the present upper section was built in 1904. The two bells in the tower were cast in 1726-1727. 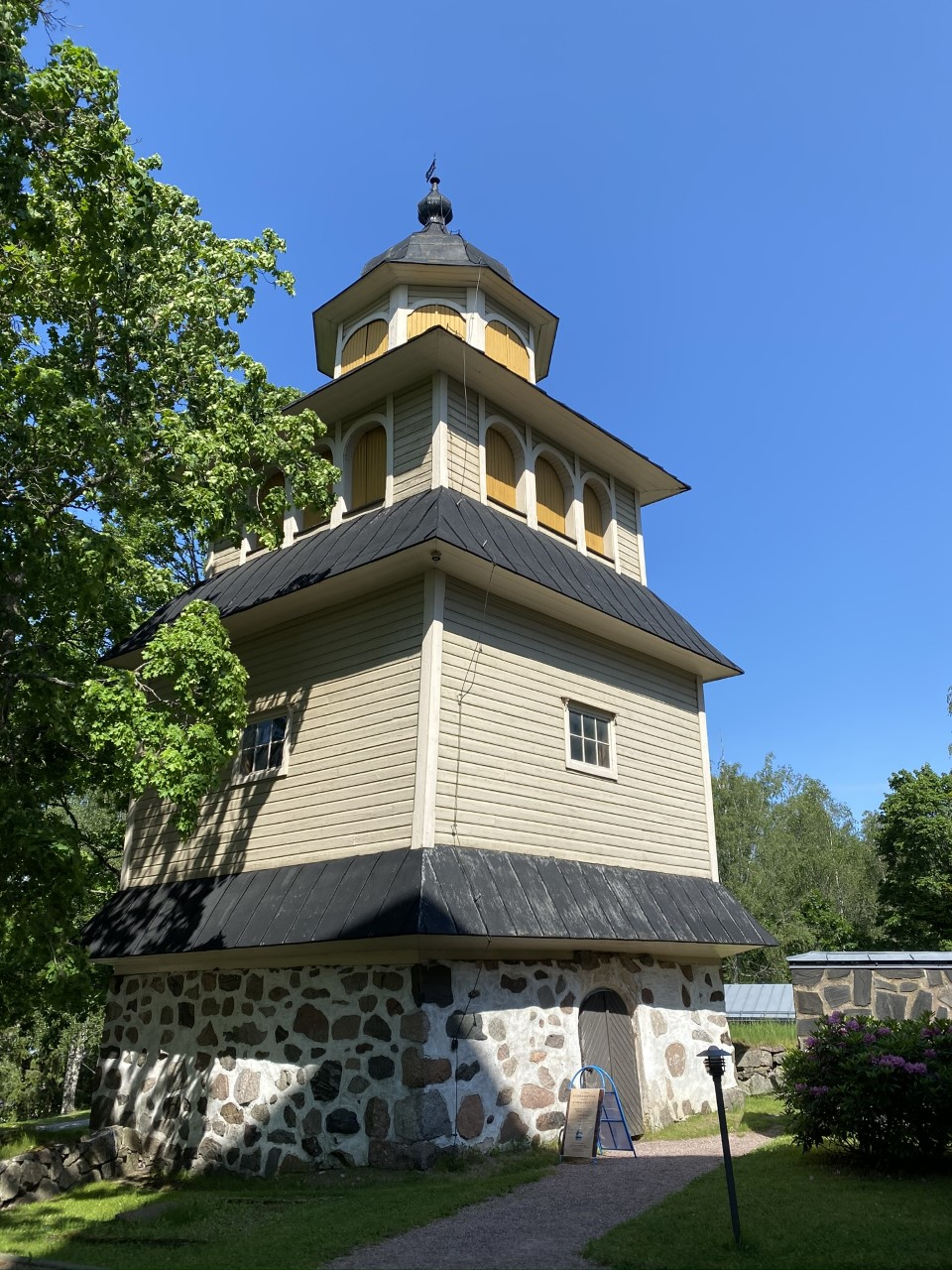